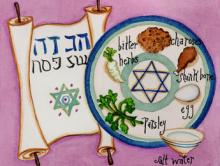 This week is the holiday of Passover for Jews all around the world. Passover is one of the few religious observances that comes directly from the text of the Torah. In those passages it is known as "The Feast of Unleavened Bread" and it is prescribed as a time when Jews should perform certain rituals to commemorate the release of their ancestors from captivity in Egypt. This festival evolved into the modern Seder, the meal of storytelling and prayer that recounts the highlights of the Book of Exodus and presents many symbols of slavery and freedom in the form of foods as a lesson for all those in attendance. Appropriately enough, President Barack Obama has made it a habit to conduct a Seder at the White House. I say this is appropriate because one of the major themes of Mr. Obama's election campaign is also one of the major themes of Passover. Namely, hope.

The concept of hope is central to Judaism in general, but it has special significance on Passover. The story of Passover itself is one of a desperate, downtrodden people overcoming what was, at the time, the most powerful empire in the world to achieve autonomy and come to understand the freedom they hadn't known for many generations. According to the text, the Hebrews were slaves in Egypt for several hundred years. Given the average lifespan of a person in that time and place, and also the likely reduction of a slave's lifespan due to malnourishment, fatigue and general hardship, it's clear that the concept of freedom would have been thoroughly alien to the generation of Hebrews who were finally freed. It would have been so many generations since anyone remembered freedom that their entire ethnic identity would have been as slaves.

The difficulty of grasping freedom is actually depicted in the Torah. When Moses finally returns to Egypt to demand his people's release from captivity, he asks his fellow Hebrews to join him in prayer and they refuse out of fear and a sense of responsibility to their tasks as slaves. Their bodies aren't just enslaved, their minds are as well. Indeed, it is an entire generation's struggle after the release of the Hebrews to even grasp the concepts of self-governance and personal responsibility.

Despite the overwhelming odds against the freeing of the Hebrews, let alone their ability to understand the need for order that freedom requires, Moses draws certainty from hope. Hope is central to the story and so it is central to Passover as a holiday. We are reminded that it isn't just an observance to remember our own escape from physical and mental slavery, but an example of freedom and justice being possible for the downtrodden in general. The lesson is that if we, a people with no country and no military power, can prevail over the greatest political entity in the world, then justice is possible for everyone regardless of their circumstances.

At the end of every Passover Seder, we say the phrase, "Next year in Jerusalem". In Jewish philosophy, it's said that Jews will return to Jerusalem to a rebuilt Temple when peace is achieved throughout the world. The phrase implies that, difficult as it may seem, we have hope for the repair of all that is wrong with the world. If homeless slaves can become masters of their own destinies through only faith and will, then no problem in this world is insurmountable.


The Argument Against "Judeo-Christian"