Stop Wearing The Star of David, to: Sarah Palin, from: Jews

Stop Wearing The Star of David, to: Sarah Palin, from: Jews 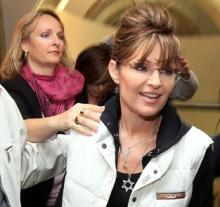 We, the Jews (yes, all of them, in one, loud, collective voice, or at least the real ones, not the Jews for Jesus or any of those idiots in Hollywood who think they're studying Kabbalah) would like to request that you remove the Star of David from your neck and never, ever wear it in public again. We know why you're doing it and that really doesn't make it any better. We don't care if you showed up in Israel for some kind of vague, pre-Presidential campaign mission of pretend diplomacy, you are on the list of the top five people we never want to see wearing one of the most recognizable symbols of our faith. Literally, it's you, Fred Phelps, Moammar Gadhafi, Britney Spears and, until very recently, the late American Front leader and noted skinhead Neo-Nazi David Lynch (not the movie director David Lynch. He's cool with us).

So, look, we know you've got the whole evangelical Christian thing going on and it's a new fashion statement with you people to wear the Star of David because you interpret sections of your Bible (not ours, you can't read ours which is why you had a bunch of incompetents translate a poor Greek translation into English in the first place) to indicate that Jews need to control Israel. We'd say we appreciate the solidarity, except that we don't and, honestly, can't.

You see, Zionism is a very complex issue that has evolved considerably in the minds of Jews all around the world, especially in America, over the past 70 years. The majority of American Jews are liberal voters, which puts us at odds with your ultra-conservative platform to begin with, but that also means our perspective on the Israel/Palestine issue is, at best, conflicted. Most of us still support the right of Israel to be a sovereign Jewish state but we're not too keen on their militaristic approach and their reliance on an American military complex that tends to be seated on the Right wing of our own government, asking us to vote for representatives who tend to be pretty regressive just so Iran doesn't bowl over Jerusalem.

But the insult of seeing you, Sarah freaking Palin, wearing a symbol of our people's resilience throughout the ages is a little less cerebral than all that. The revulsion comes from the fact that you are perhaps the least Jewish person currently in existence. You have no respect for education, or even facts for that matter. You have a laundry list of ethics breaches in just the past five years alone. You speak out against legislation that would end wars, bring medical care to the poor and show compassion for the peoples of other nations who yearn to be free. You kill for sport. You neglect your children. You lie, constantly. There is not a single Jewish thing about you and your very existence is an affront to everything we believe in.

So, please, Mrs. Palin, remove that Star of David from your person and donate it to someone who deserves to wear it. We are a proud and misunderstood people. Seeing one of our greatest symbols around your neck is both a thing of shame and a potential source of yet more misunderstanding.

Thank you for your time. May Hashem grant you the wisdom you so sorely lack.