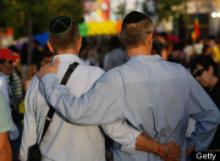 Recently, an orthodox rabbi named Areleh Harel has received some media attention for his unconventional solution to the question of same-sex attraction in Judaism. Rabbi Harel has been performing weddings of homosexual men to homosexual women in an attempt to give them a place in the orthodox community, including the creation of families. This service has been extended to an online matchmaking service intended to pair homosexual Jews for just such unions. This, naturally, begs the question: Is this correct according to Jewish philosophy?

In one sense, Rabbi Harel is well within his rights and in another he is not. Strictly speaking, orthodox Judaism doesn't even recognize the validity of homosexuality, so Harel's method is really no more philosophically problematic than marrying a self-identified homosexual to a self-identified heterosexual. Jewish marriage being a contract between two consenting individuals, it doesn't necessarily require sexual attraction to be valid.

Of course, there are laws of halacha, the standards and practices of orthodox Judaism, concerning the duties a husband and wife have to one another. This is somewhat more problematic. The law is clear about the necessity of consent in sex between spouses and the matter of consent is murky at best in the case where an individual agrees to engage in sex but doesn't strictly want to. The best case scenario for Rabbi Harel's couples is that they simply won't ever desire sex with one another and so the matter of consent will never arise, or at least not unless the couple ishes to have a child, in which case the act of creation will be no less a mitzvah for the lack of sexual pleasure involved.

From a progressive perspective, Rabbi Harel's approach is needlessly complicated. Seeing as an individual cannot live both a homosexual and orthodox Jewish lifestyle, it's up to the individual to decide between his or her faith and his or her identity. If one accepts the modern psychological premise that homosexuality is not a choice, then it is a lie to live a heterosexual lifestyle just to maintain an orthodox philosophy.

Personally, I would argue that the potential harm of Rabbi Harel's weddings is too likely and too great to be in keeping with the core of Jewish philosophy. Should these couples have children, they put those children at risk of experiencing a broken home that is highly likely considering that the marriage requires both parties to maintain relationships neither their hearts nor bodies desire. It is simply irresponsible to raise a child in a home that is so likely to disintegrate or, possibly worse, persevere through lies, self-denial and extremely limited affection.

The truth is, living a homosexual lifestyle doesn't even preclude an individual from maintaining a devout Jewish lifestyle, minus the prohibition of homosexuality itself. An individual can perform all necessary rituals, live a life of mitzvah and even be a parent while living openly as a homosexual. In this modern world where so many children have no parents at all, isn't adoption a deep and ongoing mitzvah itself? Rabbi Harel's heart may be in the right place, but his attempt to build a fence around this particular segment of the Torah is simply backward. There are far better, more compassionate and more reasonable ways to address the fact of homosexuality through the lens of Jewish philosophy than to ask homosexual Jews to ignore or actively attack who they truly are.