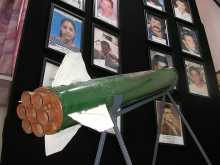 Over the past several articles I have been covering some of the aspects visible in the continuing issues of the Middle East. It is quite certain that most people are familiar with many of the historical, social, and political issues that continue to arise in the diplomatic discussions and engagements that the United States, Israel, and the Palestinians have had over time and have at present.  The recent bid by the Palestinians for statehood at the United Nations is a bold marker that there is a desire to move forward, but even as that is being pushed into the media spotlight there is conflict in Gaza. (At left is a picture of a Qassam rocket displayed in a town hall, with pictures of residents killed in rocket attacks).

In recent days militant Jihad operative and Islamic fundamentalists that profess ties with Al-Qaeda have staged several rocket attacks into Israel resulting in little damage. The Israeli response was more destructive, wounding at least ten individuals, and killing an important militant leader according to reports from the BBC and the Israeli military. The call to Jihad issued in Egypt several weeks ago has already resulted in death and suffering. Coming at a time when the Palestinians have recently scored diplomatic points, these attacks serve only to strain the relations that already stretch thinly like a veneer atop international diplomacy efforts.

Though it would appear that the attacks stem from small operations groups or cells, the Israeli government views them as Hamas allies of sorts. These groups may not answer directly to the Palestinian Authority, however their continued operations within this territory would indicate that the authorities are turning a blind eye to the situation. These attacks will continue to be viewed in this light by the Israeli government so long as they continue to be based out of Gaza or any territories controlled by the Palestinian Authority.


Confrontations At The United Nations